Melatonin Receptor as a Drug Target for Neuroprotection


Background: Melatonin, a neurohormone secreted from the pineal gland, circulates throughout the body and then mediates several physiological functions. The pharmacological effects of melatonin can be mediated through its direct antioxidant activity and receptor-dependent signaling.

Result: Several lines of evidence have revealed the involvement of the melatonergic system in different neurodegenerative diseases. Alzheimer’s disease pathology negatively affects the melatonergic system. Melatonin effectively inhibits β-amyloid (Aβ) synthesis and fibril formation. These effects are reversed by pharmacological melatonin receptor blockade. Reductions in MT1 and MT2 expression in the amygdala and substantia nigra pars compacta have been reported in Parkinson’s disease patients. The protective roles of melatonin against ischemic insults via its receptors have also been demonstrated. Melatonin has been reported to enhance neurogenesis through MT2 activation in cerebral ischemic/reperfusion mice. The neurogenic effects of melatonin on mesenchymal stem cells are particularly mediated through MT2.

Conclusion: Understanding the roles of melatonin receptors in neuroprotection against diseases may lead to the development of specific analogs with specificity and potency greater than those of the original compound. These successfully developed compounds may serve as candidate preventive and disease-modifying agents in the future. 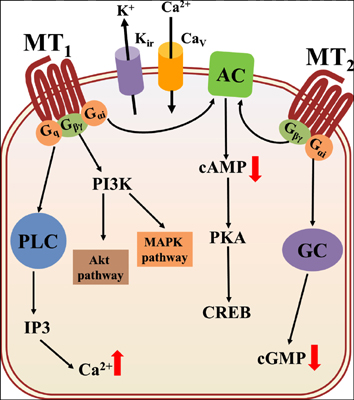