Background: Anti-cancer effect of lapachol contained in Tabebuia avellandae has been poorly understood until now.

Objective: The aim of this study was to investigate the inhibitory effect of lapachol on MMPs related to cell invasion. Its action mechanism was elucidated by analyzing the activity and the expression of MMPs and the proteins involved in the signaling pathway of cell invasion.

Conclusion: Above results suggest that lapachol could play an important role in the modulation of MMPs related to cell invasion via the increase in TIMP-1 expression as well as the inactivation of p38 through NF-kB transcription factor. 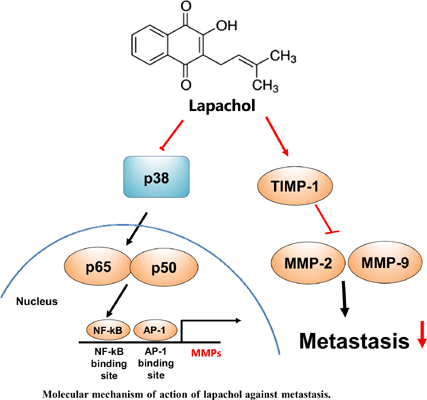