Background: Crocin is a known compound with the antioxidant and anti-inflammatory properties which may help to reduce the progression of neurological disorders. In this study, we aimed to investigate the protective effects of crocin on beta-amyloid peptide Aβ (1-40) and hydrogen peroxide (H2O2) induced neurotoxicity in PC12 cells.

Methods: PC12 cells were pretreated with crocin and donepezil (5 and 10 μM) for 2 h and then treated with Aβ (1-40) (25 μM) for 24 h. In parallel, after pretreatment with crocin (5 and 10 μM) and donepezil (5 and 10 μM) for 24 h, cells were treated with H2O2 (800 μM) for 4 h. Finally, the cell viability and intracellular reactive oxygen species (ROS) generation were evaluated using Alamar- Blue® and 2', 7'-dichlorodihydrofluorescein diacetate (DCFH-DA), respectively. The western blot test was done to compare the protein level of phospho SAPK/JNK, SAPK/JNK, PI3 Kinase P85, Phospho-PI3 Kinase P85, caspase-3 and cytochrome c) cyt c).

Conclusion: According to the results, crocin could be a promising candidate for further evaluations against the development of Alzheimer's disease through mitogen-activated protein kinases (MAPK) and the phosphatidylinositol 3-kinase (PI3K)/protein kinase B (AKT) signaling (PI3 K/AKT) pathways. 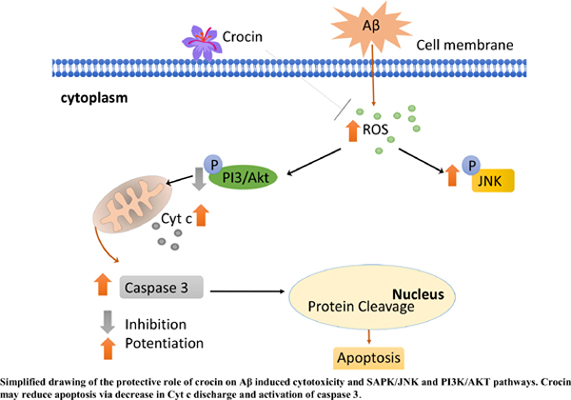