Background: Earlier diagnosis and advances in treatment strategies have increased the average survival of cancer patients over the last decades. Despite the increased number of new anti- neoplastic agents, there has been no adequate therapy for intricate malignancies, such as pancreatic cancer. Cancer metabolism is the main building block standing behind cancer promotion and progression, even in the presence of a harsh environment. Targeting metabolic pathways, such as glycolysis and pentose phosphate pathway, are regarded as a promising new strategy for cancer treatment.

Methodology: The human pancreatic ductal adenocarcinoma cell line, Panc-1, was used to study the anti-proliferative activity of targeting HIF-1α, ARNT, PFKFB4, and RBKS mRNAs by transfection with small interference RNAs, alone and in combination. The transfected cells were also treated with Doxorubicin and Gemcitabine to study the relationship between the concerned genes and the resistance of Panc-1 cells to these drugs. The effect on cell proliferation was determined using a colorimetric assay and Inhibitory Concentration ((IC50) calculation. A cross-talk study was done to investigate the silencing effect of one of the above genes on the expression of others using Real Time-Polymerase Chain Reaction.

Results: In vitro transfection with small interference-RNAs, siHIF-1α, siPFKFB4, and siARNT decreased tumor cell proliferation with a maximum effect shown by siPFKFB4; but there was no anti- proliferative effect with RBKS silencing. Suppression of transcription of HIF-1α, ARNT, PFKFB4, and RBKS sensitize pancreatic cancer cells, Panc-1, to Doxorubicin and Gemcitabine.

Conclusion: This study demonstrated the major tumor-promoting and progressive effects of PFKFB4, while HIF-1α and ARNT had modulator effects in pancreatic cancer cells (Panc-1). RBKS had a chemo-resistant role, justifying its enhanced expression in Panc-1 cells, but not a proliferative one. Silencing of all genes of interest decreased Doxorubicin and Gemcitabine's resistance and improved their antitumor effect Din the pancreatic cancer cell line, Panc-1. 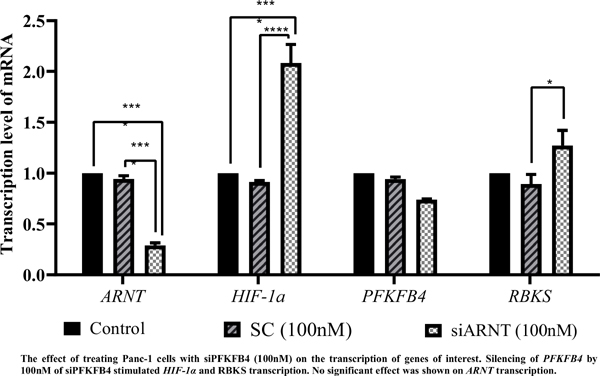